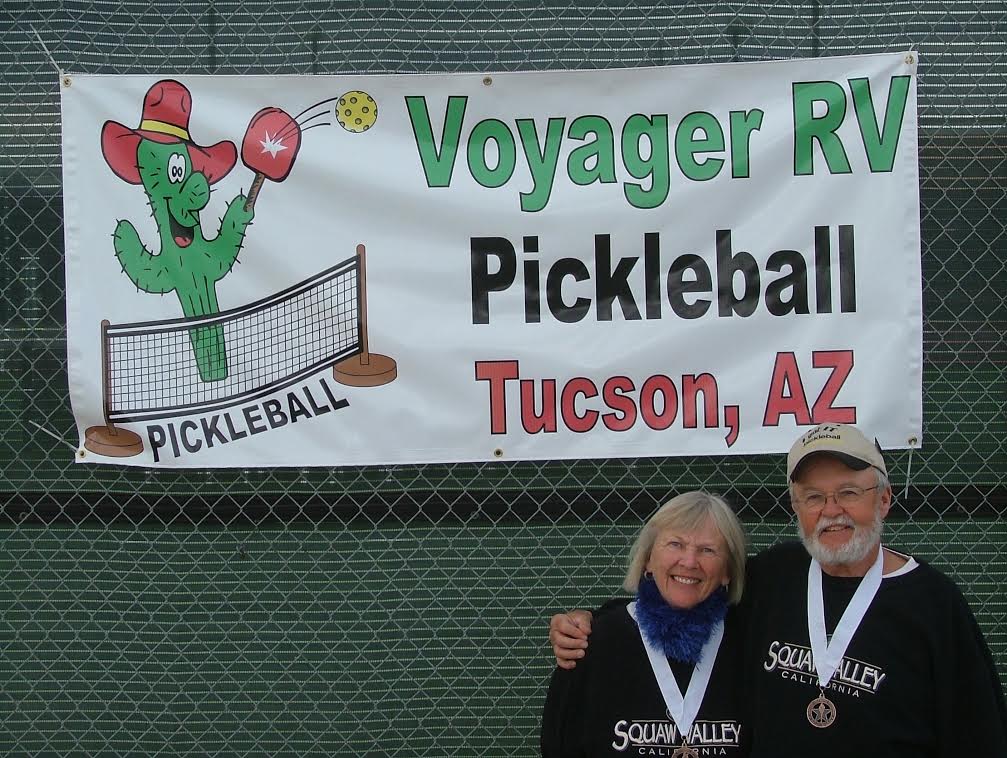 These are the words that tempted John and Jean Sproehnle into all of our’s favorite game. And has John quickly quips about his favorite pickleball memory—”the game is so much cheaper than tennis” was almost immediately followed by the purchase of a $100,000 RV that John and Jean would use to chase pickleball gold, in the form of tournament medals.

Now many of us know the Sproehnles from the local pickleball scene, but for many of you that have been hitting the slopes of Tahoe for years, you may know them as the restauranteurs of The Hearthstone—the ever popular steakhouse that donned Tahoe City for years where Rosie’s Cafe now lives.

But back to the start of the pickleball story and those tempting words, it all began in 2004 at the Voyager RV Resort, in Tucson, AZ. From Tucson, they brought the game back to their home in Squaw Valley and began introducing it to the locals. And not only did they introduce the game, they were a driving force—with the help of many others—that got Placer County to install our permanent courts. The 3 permanent courts didn’t come easy either, it was a 10-year labor of love that culminated in 40 pickleballers waving their paddles at the final county approval meeting.

It was at those very 3 courts that I was able to catch up with  John recently and get his thoughts on some of my favorite pickleball questions:

What do you most love about pickleball?

It’s such an easy game to learn at any age and it’s a great way for rebuilt (how many of you have had some sort of joint rebuild or replacement?!) former athletes to get active again.

Winning singles gold at the Huntsman Senior Games with two other ‘old guys.’ It was a three-way tie at the end of round-robin play. After the computers stopped smoking from all their calculations, we had all tied. So three golds it was—I almost guarantee that will never happen again.

What are you most excited about?

Larry Ellison’s (Billionaire founder of Oracle) involvement in the game and investment that’s bringing 50 courts to Indian Wells along with the National Championships for the next 5 years.

Never backpedal to chase down a ball, it’s far too dangerous. Instead, turn back and run. (Most injuries happen when a player trips while backpedaling.)

Where is your favorite place to play outside of Tahoe?

Reno Tennis Center on Plumas. Lots of courts, hours of play, and lessons.

Finally, where can we find you playing in Tahoe?

We’re only here in the summer since moving to Arizona, so we play mostly at Truckee Rec Center or at Squaw Valley Park and on occasion Kilner Park.

That’s it for the interview. Feel free to share the story with your friends that may know John and Jean.

Check out more interviews as we connect with the many people around Tahoe that makes our community great.

Sign me Up!
I want All the Pickleball News, Reviews And Tips from around the lake!